Ground Zero: From Omaha to Next Door

We marched slowly out from our classroom and down the stairs. We continued towards the circular driveway with the American flag flapping away in its center, wondering why the fire alarm was ringing behind us. We stood and stared at each other, wondering what was happening to the world we known as innocent and simple just a few hours before. This was ten years ago today, the beginning of a decade that would turn out to be vastly different from what we’d then expected.

I was in high school in Omaha, Nebraska on September 11, 2001. I was fifteen years old, soon to be 16, and just starting my junior year. That day started like a normal school day. I wrapped up first period English with Mrs. Byers and got ready to head down to class when Mike Kroupa burst through the door right after the bell rang and animatedly told me, “Dude! A plane crashed into the Twin Towers!” This was 8:52 CT, or just before 10am ET, by when the drama was well underway.

We went down to Mr. Fino’s Spanish class where we usually took a few minutes to watch the news in Spanish and attempt to translate what was going on. But this morning, all we watched was the news, which was some stunning images accompanied by stunned people trying to make sense of what was happening. Some people in our classroom were in tears, some were frantically trying to reach relatives or friends in the northeast, while the rest of us, including me, sat there in silence.

The day somehow went on. And then sometime in the early afternoon, bells started to ring continuously, eerie and shrill in the dispirited silence. And as we stood in the driveway of Brownell-Talbot School that afternoon with the fire alarms going off across campus, we saw a plane flying overhead. We knew by then that all flights had been grounded so it didn’t take us long to figure out that it was Air Force One overhead, carrying the President to Strategic Air Command in Omaha, and we wondered what in the world was actually happening.

Six years later, my second day in the office of my first job after college was September 11, 2007. I was 21 then, and our RBC office was at One Liberty Plaza and our second floor office was across the street from Ground Zero. It wasn’t a major anniversary but the scene was sobering: police cars and barricades everywhere, wreaths and memorabilia attached to every fence. For almost the next year, I worked alongside Ground Zero, and I’d spend especially difficult afternoons at work regaining perspective by looking out at it.

It’s tough to make sense of an event like that, although its impact on my life is hard to escape. I watched the coverage of it without much of a sense of what New York was like, without being able to imagine the density, the communities, the massiveness of it. Even when I worked next door, I couldn’t imagine what kind of chaos must’ve occurred there just a few years before, and how many people lost their lives where I was standing.

But it’s been ten years now. And although everything that’s been lost will never come back, we can see a few green shoots across the world, including at the site itself. And just as Ground Zero starts to take on a new identity, I’m looking forward to being a part of what the rest of us build in the next ten years. 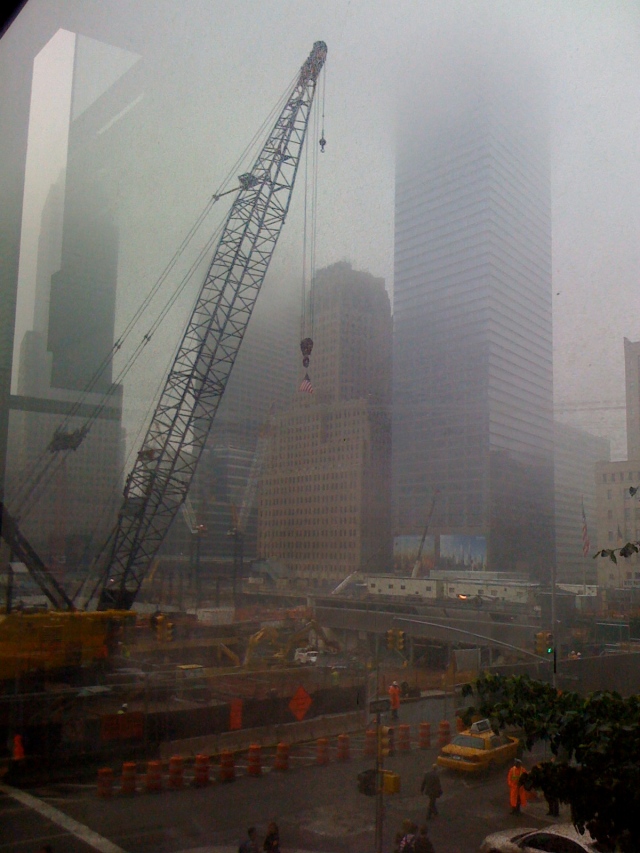 Here’s one of the most thoughtful and beautiful tributes I’ve read over the past few days. From Leon Wieseltier, Literary Editor of The New Republic:

Though we encounter it as suffering, grief is in fact an affirmation. The indifferent do not grieve, the uncommitted do not grieve, the loveless do not grieve. We mourn only the loss of what we have loved and what we have valued, and in this way mourning darkly refreshes our knowledge of the causes of our loves and the reasons for our values. Our sorrow restores us to the splendors of our connectedness to people and to principles. It is the yes of a broken heart. In our bereavement we discover how much was ruptured by death, and also how much was not ruptured. These tears lead directly to introspection.

Here is what we affirmed by our mourning on September 11, 2001, and by the introspection of its aftermath:

that we wish to be known, to ourselves and to the world, by the liberty that we offer, axiomatically, as a matter of right, to the individuals and the groups with whom we live;

that the ordinary lives of ordinary people on an ordinary day of work and play can truthfully exemplify that liberty, and fully represent what we stand for;

that we will defend ourselves, resolutely and even ferociously, because self-defense is also an ethical responsibility, and that our debates about the proper use of our power in our own defense should not be construed as an infirmity in our will;

that the multiplicity of cultures and traditions that we contain peaceably in our society is one of our highest accomplishments, because we are not afraid of difference, and because we do not confuse openness with emptiness, or unity with conformity;

that a country as vast and as various as ours may still be experienced as a community;

that none of our worldviews, with God or without God, should ever become the worldview of the state, and that no sanctity ever attaches to violence;

that the materialism and the self-absorption of the way we live has not extinguished our awareness of a larger purpose, even if sometimes they have obscured it;

that we believe in progress, at home and abroad, in social progress, in moral progress, even when it is fitful and contested and difficult;

that just as we have enemies in the world we have friends, and that our friends are the individuals and the movements and the societies that aspire, often in circumstances of great adversity, to democracy and to decency.

It has been a wounding decade. Our country is frayed, uncertain, inflamed. There is hardship and dread in the land. In significant ways we are a people in need of renovation. But what rouses the mourner from his sorrow is his sense of possibility, his confidence in the intactness of the spirit, his recognition that there is work to be done. What we loved and what we valued has survived the disaster, but it needs to be secured and bettered, and in that secure and better condition transmitted to our children. Our dream of greatness must be accompanied by an understanding of what is required for the maintenance of greatness. The obscenities of September 11, 2001 exposed the difference between builders and destroyers. We are builders. Let us agree, on this anniversary, that it is an honor to be an American and it is an honor to be free.

Home to the Travelblog and my other wanderings

← Up in the Air
Back to the blog; mycirQle becomes Delve →