Not long past Mendocino, Highway 1 turns inland and enters Redwood country. The road bends and curves continuously for over 20 miles on a challenging final stretch before disappointingly ending by merging into Highway 101.

This stretch is an epic one, twists and turns hugging the side of a mountain as the highway works its way through dense stands of tall pines. Here and there a redwood appears, its thick, serrated trunk dwarfing its neighbors.

I spent two days in these redwoods, separated by a night near the logging town of Eureka. The highlight of the first day was a 32 mile stretch on the edge of Humboldt Redwoods State Park called Avenue of the Giants, a meandering scenic drive alongside 101 through towering stands of redwoods with opportunities to pull off and hike and explore. Stretches of it are unremarkable but every so often it tunnels through trees so tall that I could barely even see the branches start in earnest from the car windows. To see the upper four-fifths of the tree, pulling over and looking up is the only way.

The air was heavy and moist, this being an area of heavy rainfall and near-constant fog. The trees soak up the moisture, complex and thoroughly interconnected root systems, needles of varying sizes all helping towards the cause.

The next day, I was walking through Lady Bird Johnson Grove in Redwood National Park when I came across a lanky, bearded young guy talking trees to a small group of people. One very interested little kid was up to every suggestion, from exploring the inside of a tree hollowed out by a fire to saying hello to a snail. I joined the tour for a few minutes, learning a few things about these enormous living things, even the youngest of the grown ones older than this country. Few of the seedlings survive, he said, but those that do can be stopped by little beyond a chainsaw, flood or major fire. They were impervious to insects or disease, and many bore scars of minor forest fires and scratch-happy animals. 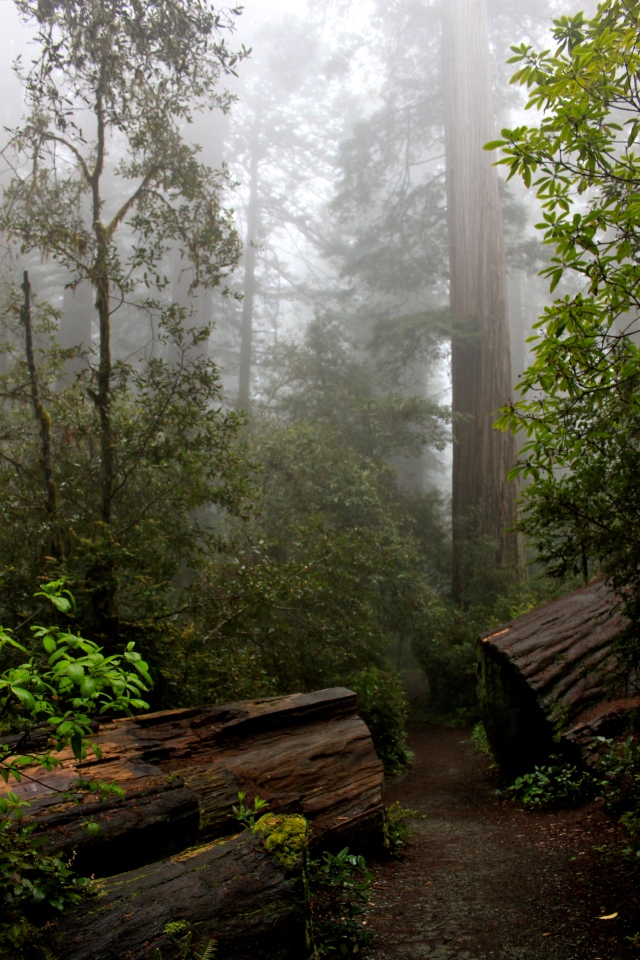 I continued down the path. A quiet calm was rarely interrupted. Occasionally the fog grew thinner and a steep slope off the trail was visible. Bright green needles frosted every tree, highlighting the newest growth of the spring, showing off in its own way. Rich undergrowth was everywhere, from a variety of ferns to berries and fungi. Lychens draped themselves in wiry strands wherever they could. The scene was surreal, magnificent in its scale.

I walked by the little boy and his dad, the former standing on the shoulders of the latter inside the partially hollowed out trunk of a giant redwood as mom took a picture. How many such awestruck visitors had stopped by that tree, I wondered. From native peoples to early settlers, from those out to make a fortune in the gold rush to hungry loggers, from geologist to wanderer to father to child, many must have similarly looked up and futilely contemplated where exactly that coarse, wet, stringy deep red trunk tapered off to a point, or exactly how long it had actually been around.

Only it knew, and barring some natural or man-made disaster, no one else will find out.

View pictures from the Redwoods.

Tags: California, national park, redwoods
Home to the Travelblog and my other wanderings