I stood on a rock and looked down. 400 feet down, with a tumble of jagged rocks in between, waves crashed against the cliff wall. The Pacific Ocean began there and went on as far as I could see, meeting the sky at a distant horizon. The cliffs, though, were the story.

Big Sur extends roughly 90 miles from about an hour north of Hearst Castle in San Simeon to about 30 miles south of the gentle beaches of Monterey. Highway 1 hugs the coastline nearly the entire stretch, curving broadly around every protrusion, a hairpin tucked along every cove. Stands of pines somehow stand along the steep valleys in gaps along the cliffs, a lonely bridge bravely spanning its sides.

I got through 90 miles of wanting to pull off and look at the highway every 30 seconds, of white knuckle inducing curves and cliffs. The colors of the ocean changed as the skies changed. Seagulls flapped, elephant seals basked in the sunshine. The senses are challenged by this kind of spectacle. 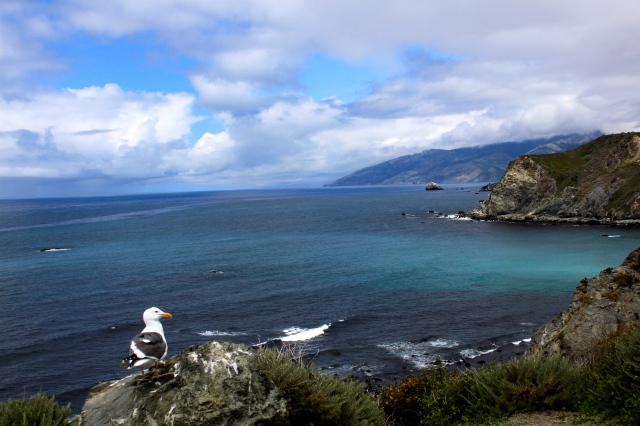 It’s exhausting. The ocean is an endless distraction, the view changing with every curve. I pulled off a few times, finding stretches of multiple hues, lighter bluish turquoise nearer the shore mixed with the spray of the surf, emerald green shades further out, blending into a dark, deep blue far off in the distance. Clouds here or there would shade portions of the ocean. Every lookout offered a new angle, a new stretch of rock and water, maybe a bridge down the highway. A seagull stared at me for a few seconds and then unfolded its sprawling wings and took off.

About halfway up Big Sur, the clouds began to look ominous. A large gray cloud gathered offshore, rain appeared to cascade down from it. I sped up a bit, not wanting to be stuck with lots of eyes-wide-open tourists in rented RVs barreling down in the opposite direction on a rainy road with a higher-than-usual landslide risk. I was left dry, however.

The skies cleared by the time I reached the northern end, only a few feathery clouds in between the clear blue sky and glittering ocean. I passed Julia Pfeiffer Burns State Park and pulled off the highway to catch the famous McWay Cove just off the highway, home to a small stream of water falling into an inaccessible cove. It’s the only place on the entire west coast where freshwater meets the ocean.

I couldn’t pin down the weariness at this point. This should be spectacular, I thought. This was a perfect scene. I didn’t know why I was this tired. But as I try in vain to describe it here, I feel tired again. Any one sight along Big Sur is a brainfreeze; it’s mindnumbing. Big Sur is 90 uninterrupted miles of this.

I’ll leave the rest to the pictures.

Tags: California, Highway 1, PCH
Home to the Travelblog and my other wanderings